The Gift that Keeps Giving: Reviving an Historic Home in Monroe, N.Y. with Strong Ties to Helen Keller 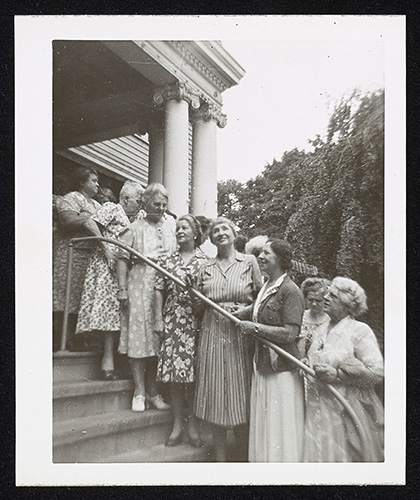 Helen Selsdon here, the archivist at the American Foundation for the Blind. Back in March 2016 I received an email from a gentleman asking me about a house called Rest Haven in upstate New York. I knew about this house and its connection to AFB and I wondered what he wanted to know. Little did I anticipate the wonderful story that was about to unfold. It is my great pleasure to introduce Timothy Mitts, the man behind an incredible campaign to save an historic building that was once owned by AFB’s President M. C. Migel and enjoyed by Helen Keller. Here is Tim’s story:

On March 23, 2016, my company—HRR Corp—signed a contract to purchase a building in the town of Monroe in Orange County, New York. We had no idea at the time we purchased the building of its historic significance. There had always been a rumor of Helen Keller’s connection to the town and the building, so I contacted the American Foundation for the Blind, the organization where Helen Keller worked for over 40 years to see what I could find out. In May 2016, AFB’s archivist pleasantly confirmed for us that the building we were about to purchase was in fact the same property that M.C. Migel called Rest Haven Inc from 1923 to 1968, and where Helen Keller was a trustee.

Since then I have learned more about AFB’s president M.C. Migel. He was an entrepreneur and philanthropist, who helped found AFB in 1921 in an effort to advance the cause nationwide of people who are blind. In 1923 he purchased property in his own summer retreat home town of Monroe, N.Y. His motivation was to help indigent women who were blind to get out of the city for a two week vacation, all expenses paid.

In 2016 I visited AFB to undertake research in its large archival collections and to find out more about the building. It was fantastic to find so many wonderful documents and photographs related to Helen Keller and Rest Haven, including the one shown here taken in 1950, of Helen Keller standing on the staircase leading up to the building’s covered porch. What has been most useful is the AFB’s Helen Keller digital archive. As a result of this database, I could locate documents that clearly identified the building’s provenance and importance.

I have since learned that around 1946 Migel instituted the idea of having the vacationers produce plays at Rest Haven to help them learn to move about independently. In an article that appeared in the Times-Herald that year it says that Rest Haven is "the only vacation home of its kind in the Foundation, Rest Haven is for women between the ages of eighteen to seventy." And another article which appeared in the New York Times in 1944 explains that "The program offered a guide who was assigned to each group of six guests to take them on walks in the foot-hills of the Ramapo Mountains, picnics on the lawns, boating on the lake, or [to] arrange quiet hours listening to "talking books," with which the home is well equipped." The article explains that vacationers came from homes and institutions in the city and adjoining states.

In January 2017, I spoke with Kit Migel, current member of AFB's Board of Trustees and grandson of M. C. Migel. Although he was only six years old at the time, he does remember his father and grandfather bringing him to Rest Haven to visit the women during the summer.

I have also spoken with his elder sister, Suzanne Migel; she spoke about her visits as a child. She told me that when she walked in the girls would greet her. Some would feel her face and tell her how beautiful she was.

On March 23, 2017, exactly one year to the day that we signed the contract to buy the property, Rest Haven was designated an historical site. This is the gift of history that keeps giving and an amazing journey of discovery!

I want to give a special thanks to the American Foundation for the Blind, Helen Selsdon, Jim Nelson (Monroe Historian), the Lantz Family, Pamela Brown-Lee of Monroe and Steve Navarro of NYC. An extra special thanks to William Krattinger (NYS Historic Preservation Program Analyst) for recognizing the historical significance of Rest Haven Inc so that we can share it with the world sooner than later.