On Driverless Cars, Bioptic Driving, and Alternatives to Driving 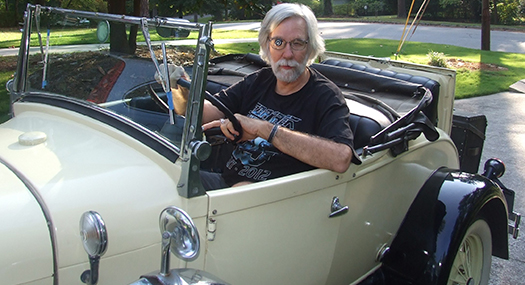 Ike Presley, wearing a bioptic device, at the driver's wheel of a 1929 Model A Ford Roadster replica

There was a recent NPR story (one of the many lately) on self-driving cars, and some of the profound impact this imagination-captivating technology might have on people's lives: Is There A Driverless Car In Your Future? As in most of these stories, the expert made no mention of the impact these cars will have on the current non-driver.

Why? Maybe because non-drivers are invisible.

On Saturday, I heard an excellent story on bioptic driving on NPR, to which AFB's own Ike Presley contributed background information. What these news items have in common is their description of two solutions to the "driving problem" of people who are blind or visually impaired, and of people with many other disabilities.

How big a deal is driving? If you're blind, you've probably been told by everyone around you that it isn't a big deal. There are lots of other ways to get around, and you shouldn't let not driving be an obstacle to having a great job and a rewarding life.

I strongly agree with the sentiment that we cannot let it be an obstacle, and with the idea that there are alternatives. But don't tell me it isn't a big deal.

How many of you have relocated to get around the driving problem? How many have turned down jobs because of the location of the opportunity? I know countless families who have moved because the breadwinner lost vision.

When I was in college, I was hired as a temp, where the company would send us out on a wide array of jobs. I was called a few times to stand in grocery stores and hand out samples—a job I can definitely do.

But, the calls always came 15 minutes before the job was to start, and the location would be random—and somehow always on the other side of town, making it two hours away at the luckiest. I never managed to demonstrate my effectiveness at this drop-everything-and-get-here type of employment. These jobs are important for early career-building, and non-drivers are cut out.

Right after college, I applied for a position as a program director with a local nonprofit. The posted description sounded perfect for me. But in the interview it became clear that the position involved driving clients. When I told her I couldn't drive, the interviewer said "Oh, This director will be a very busy person," and ended the interview. Clearly, her interpretation of my non-driving was that I must be a person not interested in doing things.

Now that you can see that getting to work by car is all-important for some people, you can see how bioptic driving came to exist. So, what is it? For a great overview and one person's experience, read this AccessWorld® article, "Celebrating Nearly 12 Years as a Bioptic Driver."

Bioptic driving isn't for everybody, but if it's right for you, it's a life-changer. First, you need to have enough of the right kind of vision to be able to make the tools effective for you—and for the other people on the road, it should go without saying. Then, you need to be able to procure the equipment and get the training. And, you must get a special license and follow the rules in your state. Not all states accommodate bioptic drivers.

What are some of the non-driver solutions to the driving problem?

When self-driving cars are ready for primetime, will people with visual impairments jump first in line to get them? All the experts have made me believe that the first people in line will be millionaires...but I think I'm first after that! I'm looking forward to the day when getting around by car is a viable option. In New York, I wouldn't want or need a self-driving car, but when I want to visit family, it'll make everything so much more possible! And, if I didn't live in New York, I'd be thinking of grocery shopping, picking up dry-cleaning...maybe tap-dance lessons on Thursday nights? Think of the possibilities!