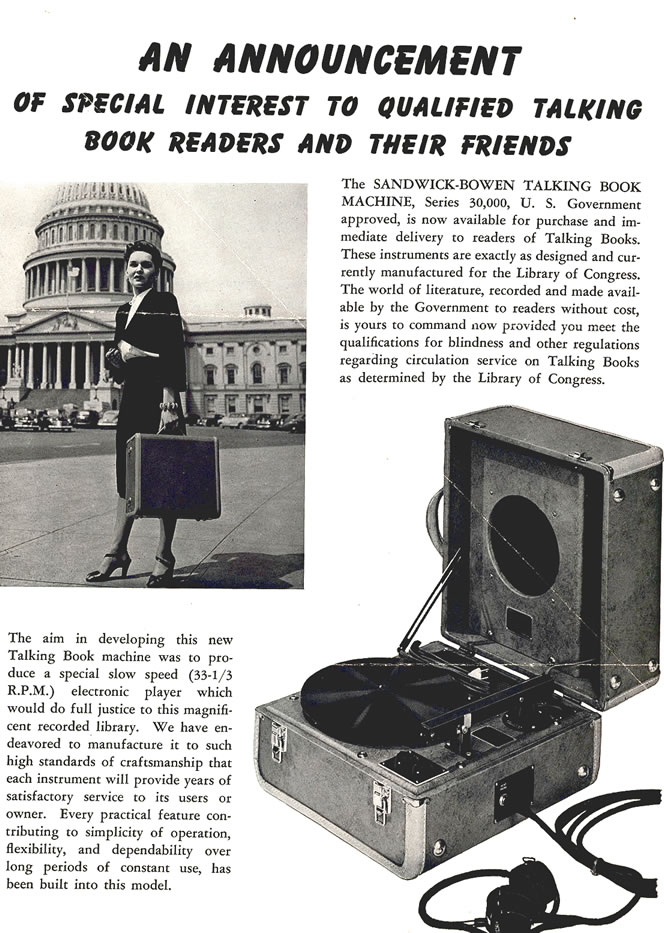 Advertisement entitled An Announcement of Special Interest to Qualified Talking Book Readers and Their Friends. The page advertises the Sandwick-Bowen Talking Book machine. The advertisement is divided into quarters. The top left quarter contains an image of a woman in a pencil skirt standing in front of the Library of Congress and carrying a Sandwick-Bowen machine. Text on the top right and bottom left quarters describe the machine. There is an image of the machine with a record on the turntable in the bottom right quarter. The advertisement is from 1947. The full text/description of the ad is included below. Talking Book Archives, American Foundation for the Blind.

By 1951 about 30,000 Talking Book machines were owned by the Library of Congress and loaned to listeners who were blind through 54 local distributing agencies. At that time, the Library of Congress was purchasing 10,000 new machines annually, 5,000 of them to replace very old models, and the other 5,000 to be issued to new users. AFB and the American Printing House for the Blind also sold machines at cost to those blind or visually impaired individuals who preferred to own their machines. Increasingly, commercial businesses such as Sandwick-Bowen—whose advertisement is displayed on this page—took over the manufacture of Talking Book machines.

AN ANNOUNCEMENT OF SPECIAL INTEREST TO QUALIFIED TALKING BOOK READERS AND THEIR FRIENDS
[Photo of a woman standing before the Capitol Building in a dark dress suit, white blouse, and stack heels, holding a closed Talking Book machine by the handle; the machine is the size and shape of a medium-sized suitcase.]

The SANDWICK-BOWEN TALKING BOOK MACHINE, Series 30,000, U.S. Government approved, is now available for purchase and immediate delivery to readers of Talking Books. These instruments are exactly as designed and currently manufactured for the Library of Congress. The world of literature, recorded and made available by the Government to readers without cost, is yours to command now provided you meet the qualifications for blindness and other regulations regarding circulation service on Talking Books as determined by the Library of Congress.

[Photo of a Talking Book machine playing a long-playing record.]

The aim in developing this new Talking Book machine was to produce a special slow speed (33-1/3 R.P.M.) electronic player which would do full justice to this magnificent recorded library. We have endeavored to manufacture it to such high standards of draftsmanship that each instrument will provide years of satisfactory service to its users or owner. Every practical feature contributing to simplicity of operation, flexibility, and dependability over long periods of constant use, has been built into this model.